"Don't Knock It Till You Try It" Curried Cauliflower Soup

This soup is the answer to that age-old question: "What the hell am I supposed to do with all this CAULIFLOWER?" We've all been there, right? Damn cauliflower. Every once in a while, I go on a tear at the grocery store or farmer's market and buy vegetables with wild abandon, and with the best of intentions. And then they go in the fridge. And sit. And sit a little longer. Until I frantically locate a recipe to use up those leeks (potato leek gratin) or kale (ribollita soup). So what do you do with a head of cauliflower? Usually I roast it in a hot oven with olive oil, salt & pepper. But I wasn't in the mood for that. Then I remembered a recipe that my sister Holly emailed me a couple years ago from her boss, Kristan. At the time, she said to me, and I quote, "It sounds really weird, but it is SO GOOD." And she was right. It's weird. And SO GOOD.


Now you're probably thinking, "This lady only posts recipes about soup."  Not true, but I do LOVE soup. So homey and comforting, and since we're inching up on spring I feel the need to make as much soup as possible before the snow melts. I have made a few changes to the original recipe- I decreased the amount of oil, because it really doesn't need much. I also increased the amount of brown sugar- it's not a sweet soup by any stretch, but the sugar definitely rounds it out and balances the healthy dose of cayenne. This soup is delicious, healthy, and filling.  So don't knock it until you've tried it. Curried Cauliflower Soup.


First, chop up one onion (or two, as I usually double this recipe and freeze half). Saute the onion and curry powder in olive oil in a large pot (like my beloved Le Creuset) over medium heat.  I also add a bit of salt at this point and a couple grinds of pepper, since you really need to season soups and stews in stages to help build flavor. 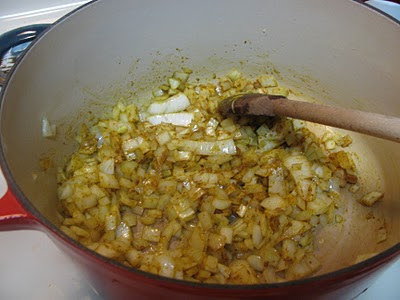 When the onion is soft and translucent, maybe 4-5 minutes, add one peeled, cored and cubed apple. 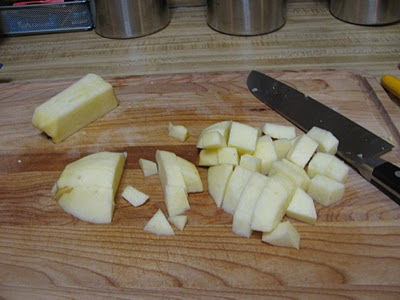 Next, chop up one head of cauliflower (I usually cut out the core to make cutting the florets easier, but there is no science to this- it all gets pureed in the end.) 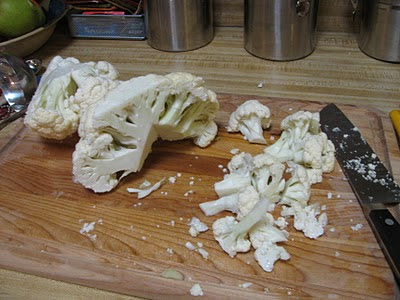 Then add 1 quart, or four cups, of chicken broth. Now, the ideal way to make this soup is with homemade chicken stock, which is what I'm using here. I had no idea the difference it would make in flavor and body to soup until I made some homemade stock last year. (I have a great recipe courtesy of my BFF, Ina Garten, and I'll post it sometime!) I make a huge pot of homemade stock and freeze most of it. But any good quality, low sodium chicken stock will work fine (I prefer low-sodium so I can control the salt content in the soup. V. important). 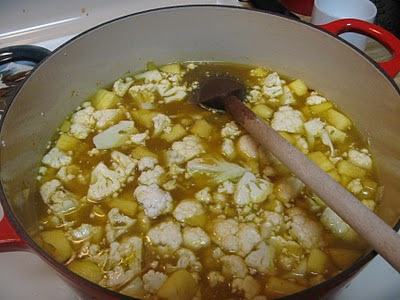 Bring the chunky soup to a boil, then turn down the heat and simmer until the apple and cauliflower are very soft and tender and you can pierce them easily with a fork. At that point, take an immersion blender and puree the hell out of it. This is a soup that really tastes best if its smooth, so spend some time on this step. If you don't have a stick blender, you can use a regular stand blender. Do it in batches and be careful because it's very hot! 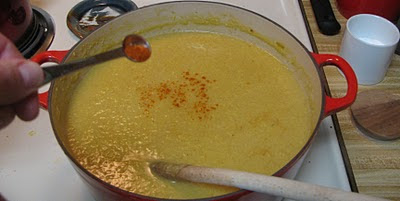 Once it's pureed, return the soup to the pot (if you used a stand mixer) and add the brown sugar, cayenne, and salt and pepper to taste. When you serve it, add a dollop of sour cream or Greek yogurt (which helps to cool some of the spicyness from the cayenne) and some homemade croutons (recipe follows) right on top- I love the crunch it adds to the soup. Eat, and repeat (yup, it's that good). 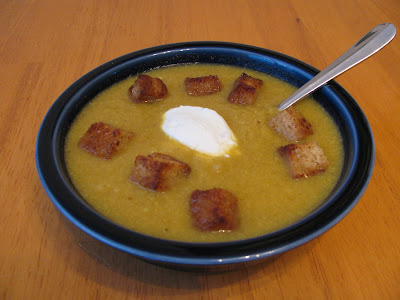 (1) Saute onion and curry powder in olive oil in large pot. Add a bit of salt and a few grinds of fresh pepper.

(2) When onion is soft and translucent, add apple, cauliflower, and broth, scraping the brown bits off of the bottom to incorporate.

(3) Bring broth to a boil, then turn down the heat and simmer until apple and cauliflower are very very tender when pierced with a fork.

(4) Using either an immersion blender, a food processor, or a blender, puree the soup in batches and then return to the pot.

(5) After you puree all of the soup, add the brown sugar, cayenne, salt and pepper to taste. Serve with a dollop of sour cream or Greek yogurt, and top with homemade croutons.

Just a note: This soup freezes very well, and I usually double the recipe and stash half of it in the freezer for later.

Cube bread in roughly 3/4 inch pieces.  For every 1 cup of bread cubes, use one teaspoon of olive oil.  Toss bread cubes with olive oil, and a generous dash of kosher salt and several grinds of pepper.  Bake at 375 degrees for 15 minutes, tossing once halfway through.  Allow to cool and toss several on the soup (or a salad!).

I make these once during the week and they keep for several days in a plastic baggie.

It's true- I've tried it and this soup is delicious! The croutons elevate it to a special level of sublimeness.
Best enjoyed with the chef, while gossiping and watching Ardy Party.

Made this soup last night. Who knew onion + cauliflower + apple could be so good! I did a few things differently:
1. I used garam masala b/c that turned out to be the only curry/spice mix I had on hand. Tasted great, but the brown color of the spices made the soup look a little unappealing. Might try throwing in some turmeric if I use garam masala again.
2. Veggie broth!
3. I didn't peal the apple. Figured it's all getting blended together anyway, and my mom always said all the good stuff is in the skin. I have a great high-powered blender, so there was no trace of the apple skin when I got done blending.
4. Tons of cayenne! I am known for making food that is almost inedible it's so spicy, and this turned out to be no exception.

Thanks for another great (and holy crap, healthy) recipe, Heidi!

I'm so glad you liked it, Rebecca! I aim to please. Healthy food is the best when it tastes good. I'm with you re: peeling vegetables. I don't do it unless I have to. This sounds like an opportune time to put a plug in for a NEW immersion blender for Christmas (instead of the $15 Amazon.com special I have). Mom, Dad- you getting this down??