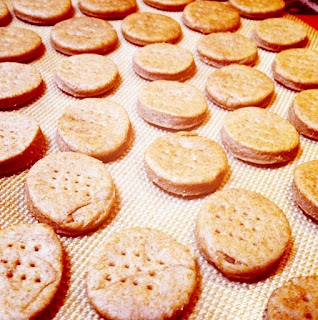 Typically, I dedicate this blog to comfort food that comes out of my kitchen for human consumption.  But because this is my blog, I'm taking a few liberties today. All of us that know those crazy pet owners that go on and on and on about their beloved pets.  How wonderful they are, how perfect they are, this funny thing or that hilarious thing that they did today (wait, am I talking about dog owners or my friends bragging about their kids?)

Well, this is not quite that kind of brag session.

But I am going to tell you a little story about the man in my life.  Those that know me are well-acquainted with my furry, four-legged son Milo.  Whenever someone meets him for the first time, and comments on his generally crazy antics and good-natured personality, I'm reminded of how far me and my little man have come.  And to know a little about me is to know a little about Milo.
As a bit of background, I grew up on a rural road off of Chena Hot Springs Road near Fairbanks.  My parents have lived in this house for 34 years.  I grew up with big dogs- a German Shepard named Spinach (my brother Erik was a Popeye fanatic), several black labs named Rocky I-III (our family didn't have a lot of luck with this breed), and a Golden Retriever named Bear who was probably the best dog three young children could have dreamed of growing up with.

I had always wanted a dog of my own, yet I was too busy during school to care for a plant let alone a living, breathing creature.  But I loved my friend Amanda's little Cairn Terrier named Maggie.  Little Maggie is a sweet, affectionate lap dog.  When I moved to Fairbanks for a year after law school, I moved into a tiny 430 square foot apartment.  A big dog was not a possibility, so I went in search of a sweet little Maggie of my own.

Enter a rambunctious, ferocious, terrorizing puppy named Milo.  I actually didn't pick this dog out.  I left this monumental, life-altering decision...to my sister Holly and her then-boyfriend Sam (now my favorite brother-in-law).  When they arrived at the breeder's house near Salem, Oregon, he was the only puppy left of the entire litter.  Hindsight being what it is, this probably should have been a clue.  But Sam loved how this tiny 12 week old puppy was "really getting after it" while tearing it up with the bigger, older dogs in the backyard.  Holly, on the other hand, thought the home was filthy hellhole and refused to leave the poor, defenseless creature to fend for itself in a pigsty.  They each had their reasons, I guess.  So, that's how I got my dog. 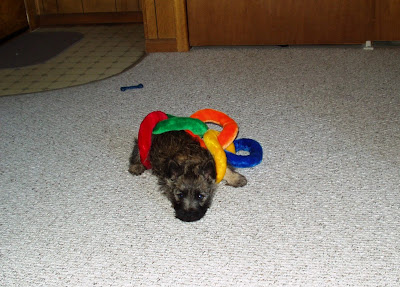 There was no doubt that this was an adorable, albeit funny-looking, little puppy.  That's how they suck you in.  But right from the start, we got off on the wrong foot.  To call Milo a terror of a terrier is to call Iran a pesky little world problem.  My mom called him "Devil Dog."  My brother Erik affectionately nicknamed him "Spawn of Satan."  He growled, he bit, he chewed, he dug holes wherever he found dirt or freshly-mown grass.  He was a NIGHTMARE.  After one particularly bad evening at my parents house the first week I owned him, I remember locking myself in the bathroom and crying, wondering whether I should just deposit this problem onto some other unsuspecting idiot.


But at that point, I knew it was too late.  A mother's love is unconditional, and between stints of ruining my new running shoes and peeing on the front mat, this wirey little beast found tiny flickers of time to make me smile.  Somehow, I had to figure out how to tame the untameable.  With the help of some amazing coworkers, and the patience of family and friends, I began to work on his aggressiveness and make him heed a few commands.  Milo needed boundaries and discipline, and that's what I gave him.  But he also needed affection, and that was never a problem.


﻿
﻿After a wildly bumpy start, Milo began to come around.  I mean, sure he almost got kicked out of puppy class for fighting (and was the only dog that had to be on a leash the entire session).  And yeah, he bit a little girl on the nose after I found her wrestling with him on the floor.  And of course he escaped down the street several times at our new house until I had patched every last whole in the fencing.  Is Milo a perfect dog?  Oh dear God, no.  And my friends know, because I'm the first to admit it.


But when friends meet him these days, they truly can't believe the stories I tell about our early days as a family.  Nowadays, he's fun, he's affectionate, and he's always full of piss and vinegar.  While I have no desire to relive those hellish puppy days, I can't imagine my life without him.  My friend Mera still calls him Milosevic, "the little war criminal."  But now she says it with a bit more sweetness and affection than when she coined the phrase in his early days. Through new different towns, different homes, new jobs, boyfriends, breakups, life's joys, and life's inevitable heartaches, Milo has been there with me through it all.  And I love the hell out of him for sticking with me.
﻿﻿
﻿﻿New Year's Day marked Milo's 8th birthday.  I know this because the breeder mentioned to my sister Holly that it was a litter of new year's day puppies.  Every year on his birthday, I make Milo his own homemade treats.  They're super easy, healthy, and you probably have all of the ingredients already in your pantry. 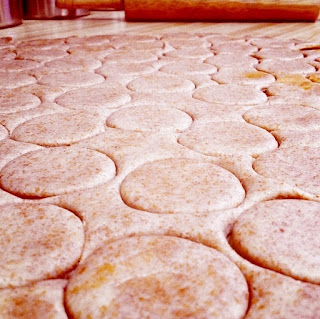 
Preheat oven to 350 degrees.  Combine oil, peanut butter, and water in a mixing bowl.  Gradually add flour , then knead into a firm dough (I use the dough hook on my mixer).  Roll dough to 1/4 inch thickness and cut with a cookie cutter.  Place treats on an ungreased or parchment-lined cookie sheet and bake for 20 minutes.  Let cool and air dry for several hours, or overnight.  Store in an air tight container.  Trick your friends into eating them, then tell them they're dog treats (it will totally freak them out, but then when you tell your friends that you made them I don't think they'll be very mad at you). 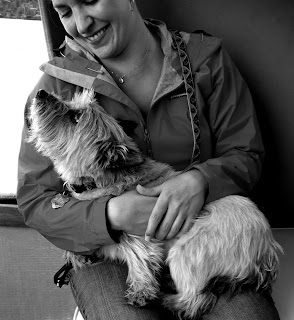 Email ThisBlogThis!Share to TwitterShare to FacebookShare to Pinterest
Labels: For the pups