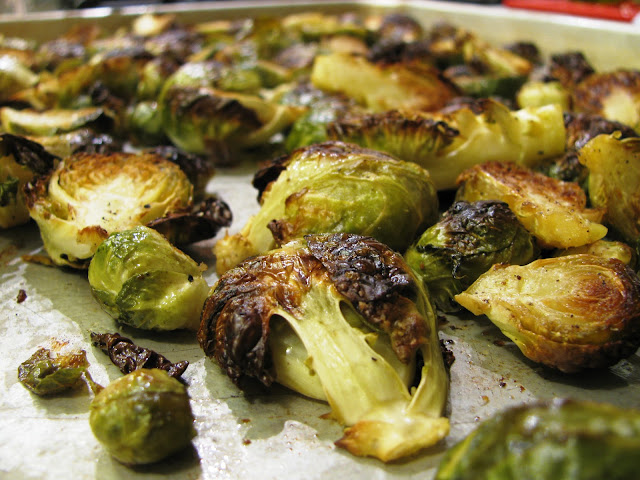 I can't let another holiday season pass by without writing about my favorite vegetable dish in the whole world.  Roasty, toasty Brussels sprouts.  The most wonderful veggie preparation of them all.  They grace nearly every holiday table I'm at.  And I'll bet I'm not the only one who brings a stalk of Brussels sprouts with her in her suitcase when traveling to visit her sister 3000 miles away for Thanksgiving.  Am I right, people?!
I'm a little bit of a weirdo.  But at least I own it.
Growing up, my family was not your typical family of eaters. We ate all the things our friends ate, but my parents also fed us quite a bit of atypical eats for youngsters. We were the kids sitting down to eat a bucket of steamer clams, making our own sushi, picking apart Dungeness crab, and loading our plates up on buttery Brussels sprouts.  We learned to love unusual foods, and to this day we're the least picky family of eaters I've ever known.  I have my mom and dad to thank for that!

If you've tried Brussels sprouts (named after the city that made them popular) and think you hate them, you don't.  You just had them steamed or boiled until they were mush and smelled like overcooked cabbage.  So try them like this.  Trust me, you will LOVE them.
If you've never tried Brussels sprouts...what's wrong with you?!  They are delicious!  Seriously!  And don't be one of those people that says you don't like something when you've never tried it.  It doesn't work on me when my three year old niece says it, and it won't work if you say it.  Buy yourself a pound or two of Brussels sprouts and give this recipe a whirl. 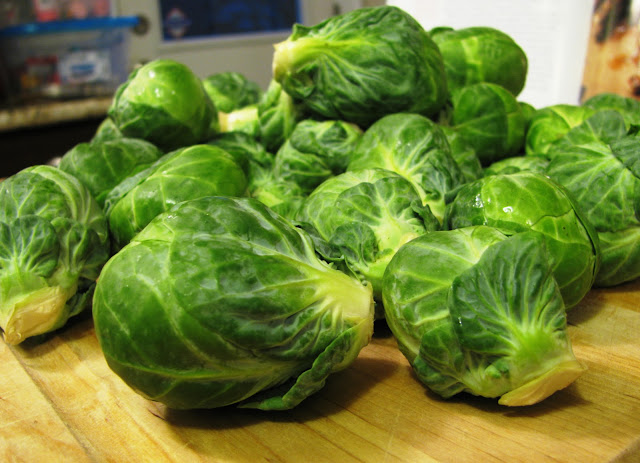 Roasted Brussels Sprouts
(Adapted from Barefoot Contessa)
1 1/2 pounds Brussels sprouts
3 tablespoons olive oil
3/4 teaspoon kosher salt (big pinch)
several grinds of black pepper
Preheat the oven to 425 degrees.  Remove any ugly or yellow outer leaves from the sprouts.  Cut off a bit from the the stem end, then slice each sprout in half.  Scatter on a large sheet tray and toss with olive oil, salt and pepper.  Roast for 30-35 minutes, tossing with a spatula halfway through cooking, until they get a nice golden, crispy brown (I like mine really crispy).  Once removed from the oven, toss with a bit more salt and serve immediately.
Enjoy! xo H
Posted by Heidi at 4:40 PM

Nicole, you do it by making them these. Seriously, I win loads of people over with this side dish. :) Stay warm during the Fairbanks holidays!

I just found your blog after searching Alaskan food blogs. Ironically, I made my own adaptation of the Barefoot Contessa's Brussel Sprouts for Thanksgiving. I would have to agree with you, if someone is not a fan of brussel sprouts, they would be after eating these. There is something amazing about these!

Hi Heidi! I made these the other night, and due to inattention they REALLY got crispy. They were still absolutely melt-in-your mouth delicious, and I'm eager to make them again! (and so simple)
Thanks and wishing you the happiest new year full of good things!! Katy

I used to wonder how people could not like brussel sprounts. I found out why by way of a DNA test. The test results included a list of traits that said I was "taste blind" and did not have the ability to taste the bitter flavor of beets, brussel sprouts, etc. So there you have it. It has nothing to do with taste buds maturing as my granny said - its in each person's DNA!!