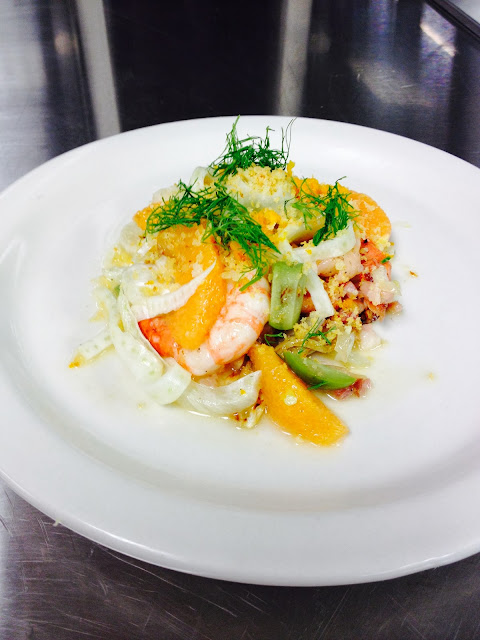 There comes a time in every woman's life when her grit, determination, and willpower are put to the test.  A time when resolve and fortitude are challenged in a epic battle of skill, creativity, and knowledge.
(Bet you're thinking that I'm talking about the time I took the bar.  Yeah, that totally sucked-- worse than what I'm actually talking about, but no one wants to hear me complain about it for the 800 thousandth time.)
I'm talking about the Alaska Sustainable Seafood Cookoff!  Sponsored by the Alaska Food Policy Council, the Cookoff was held on Thursday, October 24th at the newly-opened Downtown Soup Kitchen in Anchorage.
The Challenge:  Four duos battle it out in one hour to produce the best seafood dish for 5 local foodie judges.  Think Iron Chef meets Chopped.  (And if you don't understand these two AWESOME reality show references, then, well...nevermind.)
The Catch:  The contestants don't know what they're actually cooking until the competition begins!

We must have been crazy.  And we are, a little.

So I did what I always do when I'm asked to compete in an Iron Chef-like local seafood cookoff at a soup kitchen...I teamed up with my friend Kate Consenstein.  We called ourselves the "Salty Sisters."  And we ROCKED this competition.  LIKE.  IT.  WAS.  OUR.  JOB.
While we were allowed to bring our own tools and three "secret" ingredients along with us to the event, we didn't know what we were actually cooking until Rob Kineen of Fresh49 yelled "GO!" revealing we had one hour to cook...Alaska spot prawns.
Excellent. 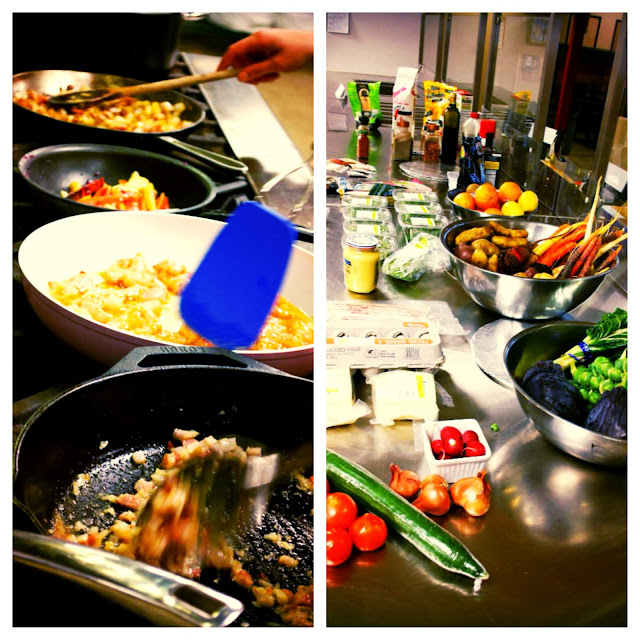 We were off to a shaky start.

And both of us, with our strong opinions and even stronger personalities, worried if our friendship would survive the challenge.

People, it didn't just survive.  It THRIVED.  Turns out, we make a perfect competitive match.

Kate and I were both a bundle of nerves before the competition began.  My hands were sweaty.  Kate's stomach was turning.  This was supposed to be FUN?!  Why do we torture ourselves with this kind of FUN?!  But as soon as the clock started running, the nerves simply disappeared and we became seafood-cooking machines.  I took care of the produce while Kate took care of the protein.  The oranges were perfectly segmented.  The fennel was neatly shaved on my mandolin (best birthday present my brother's ever gotten me!)  The shrimp was peeled with precision, with the tails left perfectly intact.  And more importantly, they were cooked to PERFECTION.  Just barely opaque all the way through.

As the clock began winding down, pans were clanging, food was flying, and people were running into each other in the kitchen.  We were all down to the wire. 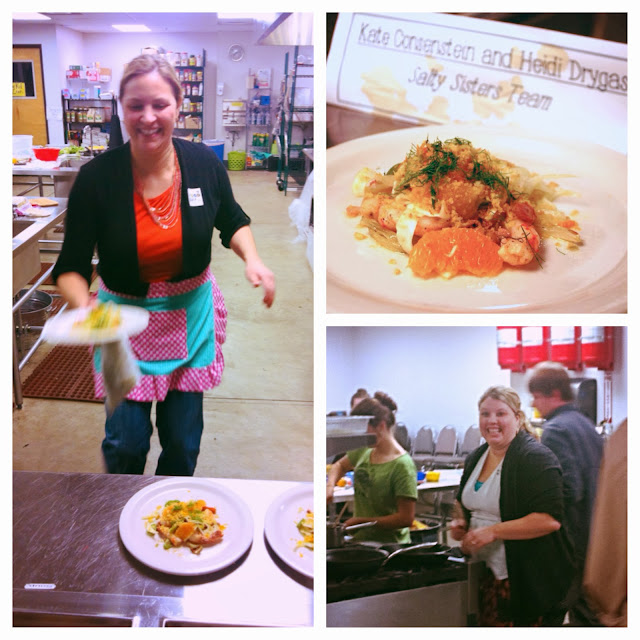 After tasting my roasted fennel, I worried I over-seasoned it.  It had a sharp, salty bite to it.  But there was no time to fix it, and Kate and I ultimately decided it should make it on the plate.  It was a good decision.  Turns out, the contrast of flavors and textures between the roasted and raw fennel, coupled with the sweetness of the oranges and briny olives, was an incredible combination.  The fresh Alaska spot prawns, after mingling with the chopped bacon in the oven, were salty-sweet and utterly succulent.  Yet Kate and I both agree that the perfect finishing touch came from the buttery toasted citrus breadcrumbs, which added that crunchy texture that we all crave. 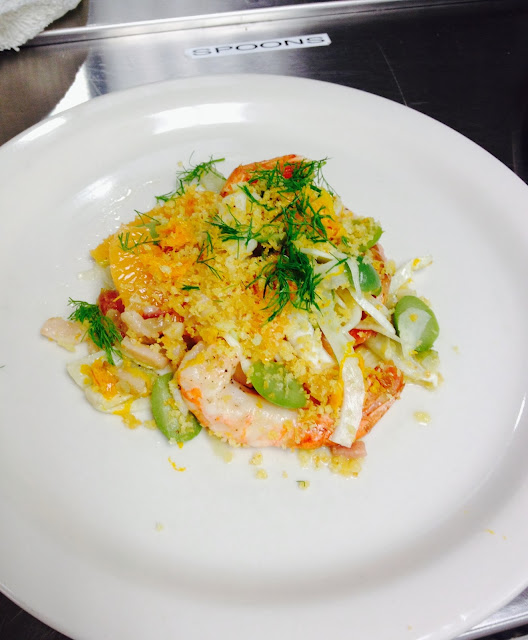 
(2) On the medium thickness setting of your mandolin (or with a sharp knife), slice one fennel bulb crosswise about 1/4 inch thick.  Toss the fennel on a baking sheet with 1-2 teaspoons of olive oil and season with salt and pepper.  Arrange in one layer and bake for 20-30 minutes until soft and golden.


(3) Place orange segments and their juice into a bowl along with the olives.  On the thinnest setting of your mandolin slicer (or by using a very sharp knife) thinly slice two fennel bulbs crosswise, being careful to reserve the fronds as garnish.  Add sliced fennel to the bowl, along with the lemon juice and 1-2 teaspoons of olive oil.  Season with salt and freshly ground pepper to taste and toss well.


(4) Cook diced bacon on medium-high heat in a large cast iron skillet. When bacon is partially cooked and some bacon fat has rendered, add 1 tablespoon of butter and add shallots. Once shallots have cooked to translucency, remove from heat. Layer shrimp over shallots and bacon and season with salt and pepper.  Bake at 425 until the shrimp just barely become opaque, about 5-7 minutes.


(5) Mix the bread crumbs with 1 teaspoon of orange zest, a pinch of salt, and a few grinds of pepper.  In a large skillet on medium-high heat, melt 1 tablespoon of butter and add the bread crumbs to the skillet.  Toss the crumbs around in the skillet until the breadcrumbs appear toasted, about 5-7 minutes.


6) To serve, place the roasted fennel on the bottom of the plate.  Top with the shrimp and shallot/bacon mixture.  Place the salad of orange, fennel, and olives on top of the shrimp along with a drizzle of the juices.  Sprinkle with the seasoned breadcrumbs, additional orange zest, and fennel fronds.
Enjoy!
xo H & K
Posted by Heidi at 6:05 PM

Missy just sent me to your FB page/blog...and I just noticed one of our Mabel aprons in the photo - awesome! :)

Awesome! My friend Kate bought each of us one for the Seafood Cookoff and I LOVE them. If you have a website, I'm happy to link to it. I've gotten a ton of compliments on it. :)

Hey Girl -- I'm salivating!!! Your recipes look so delish! I have to try that salmon recipe...yum! Helene and I are doing well; we're still hiking out here in AZ almost every other weekend. The weather has been just gorg! I just completed my rim to rim hike in the Grand Canyon for the 3rd time....it never gets old! Anyway, we miss your faces, and think about our times with you all in the Alps alot! Stay warm and love your blogs!!! -- Marietta