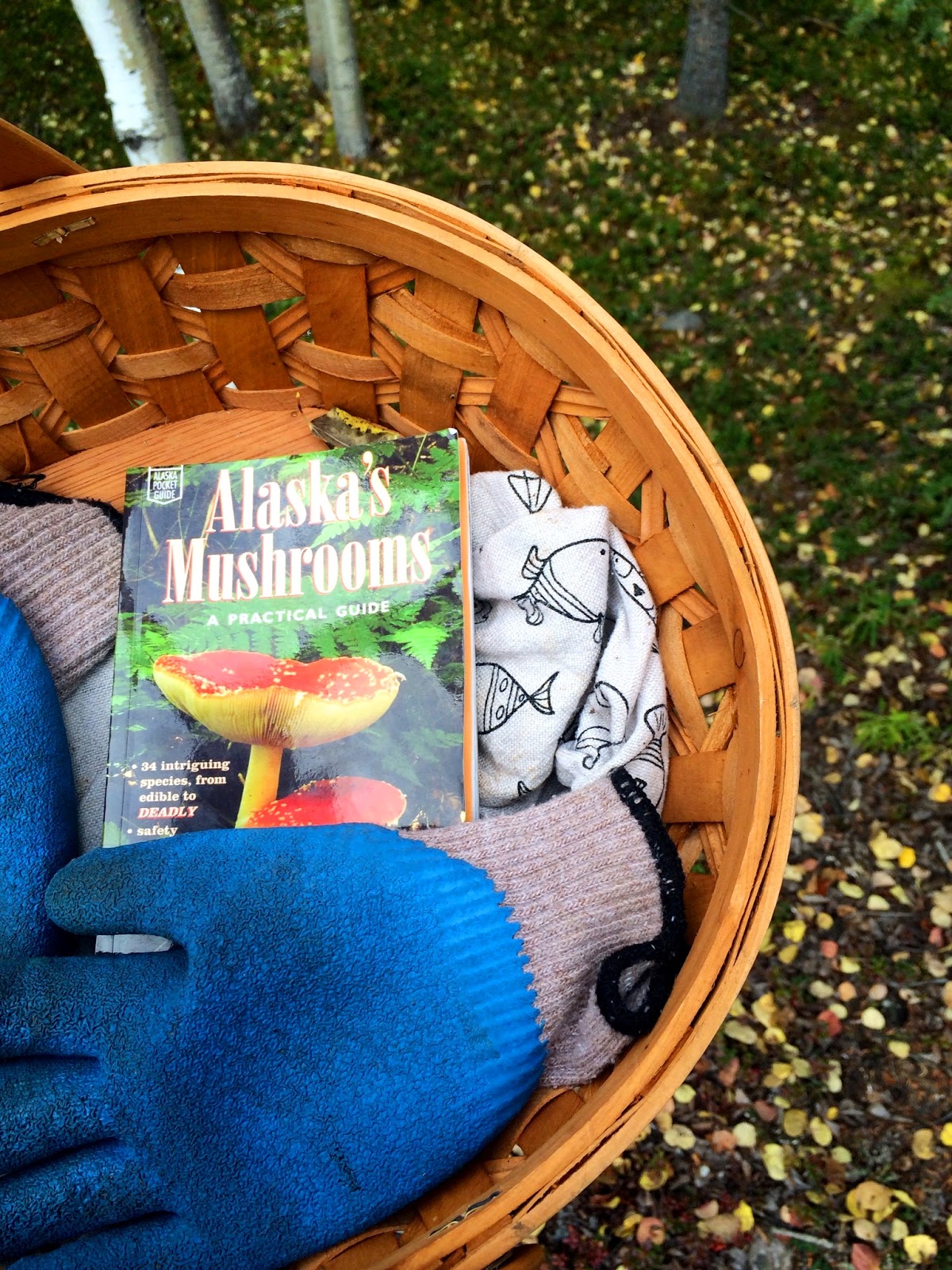 My enthusiasm (read: obsession) with foraging has not abated, despite the falling leaves and crisp autumn temperatures here in Southcentral Alaska.  Despite many years of fishing, clamming, picking berries and other wild Alaska edibles, one edible in particular has eluded my harvest: mushrooms.
I've been intrigued with the idea of hunting for wild mushrooms for years, but I thought I would need to hunt alongside an expert so that I didn't, well, DIE from ingesting a poisonous mushroom.  As my Dad is fond to say, "Have you read the book 'How to Tell Mushrooms from Toadstools' by the late Dr. Johnson?"  Sigh.
Still, I wasn't entirely deterred.  I read books, pamphlets, and numerous articles on the internet.  I kept thinking, "I can do this on my own, right?"  And then THIS happened:


I picked the most perfect, beautiful King Bolete you ever saw a few weeks ago in the Alaska wilderness.  A boletus edulis according to my mushrooming friend Laurie Constantino.  The problem was, I didn't know it at the time.  I had a hunch, but didn't feel confident enough just then.  I took some pictures, admired the pretty mushroom, vowed to check with friends when I returned to an area with cell service, and chucked it in the woods.  CHUCKED IT IN THE WOODS.  Like a piece of (completely compostable and Earth-friendly) trash.  It was only later that I discovered what I had found.  And I was crushed.  Devastated.  Sickened by what I had innocently done.
And so, I vowed to make up for my rookie foraging mistake ever since.
Since then, I've scoured my books and the internet for articles about mushrooms.  Online articles by local foragers Laurie Constantino and Natasha Price have been immensely helpful, and I've relied on them heavily.  I've also used this booklet on Alaska Mushrooms by Harriette Parker, as well as this online pamphlet from the USDA.
I've decided to heed the advice of my friend Laurie and avoid any mushrooms with "gills."  Edible gilled mushrooms, where the underside of the cap looks similar to fish gills (just like your typical button mushroom or Portobello mushroom from the grocery store), are tricky to spot in the wild.   Instead, I've focused on two edible varieties that are the easiest to identify and the most delicious:  king boletes (which have a sponge-like texture under the cap and a smooth stalk, as pictured above) and puffballs (which must be creamy white all the way through in order to be edible- no spores!)
I've been out and about in the forests near Anchorage, Fairbanks, and Denali hunting for these tasty edibles and found dozens of beautiful mushrooms along the way.  I even discovered a few edible Alaskan scaber-stalk boletes in the woods behind my old elementary school, which I cleaned up and sautéed with butter, garlic, salt, pepper, and fresh thyme from my garden. 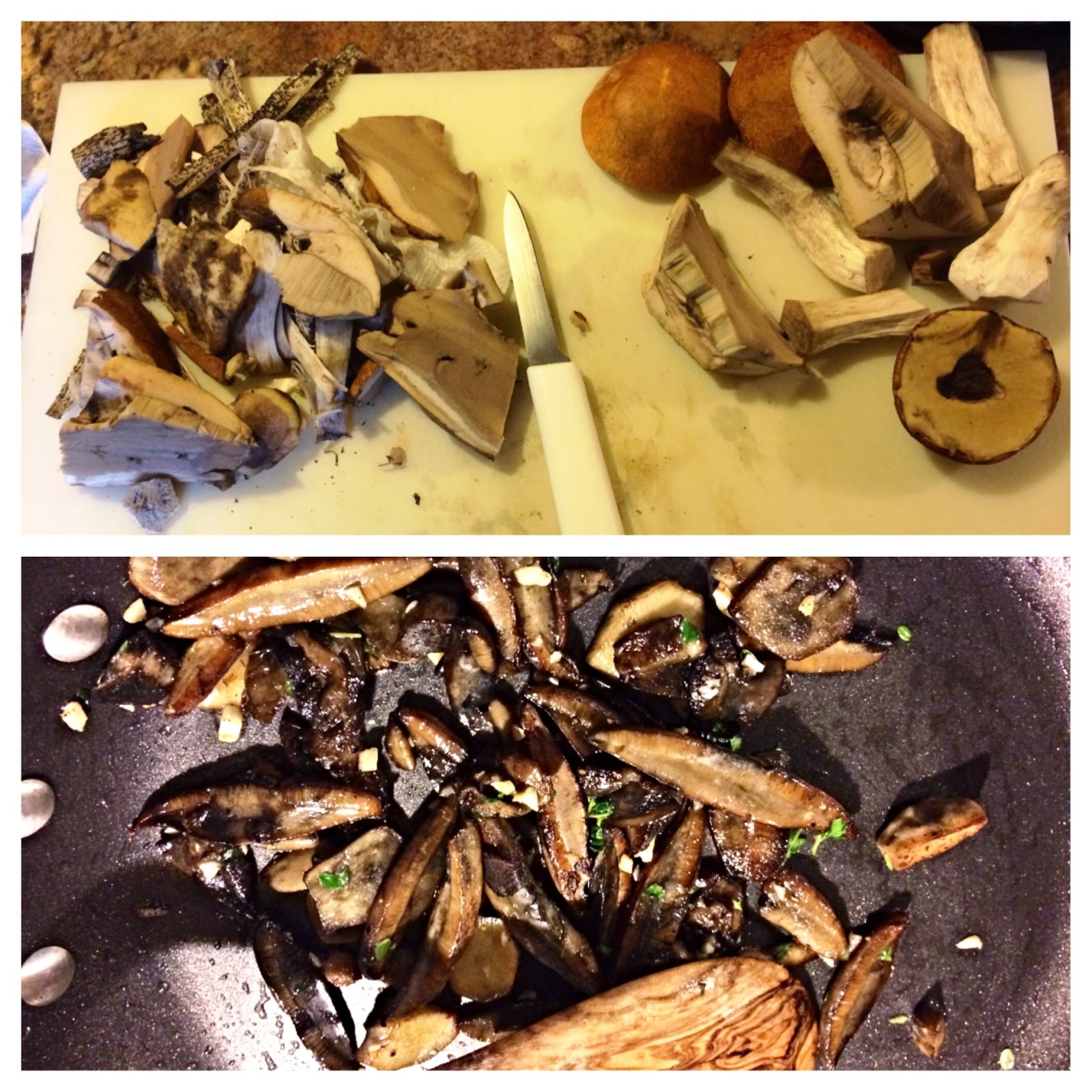 I ventured out last week in Anchorage in the rain with my friend Dave Waldron from Alaska Public Media.  (Check out the article and the radio segment here!)  We had a great time tromping along the soft, mossy forest floor looking for edible mushrooms.  Pickings were slim, but we spotted these puffballs and a soggy lil' bolete. 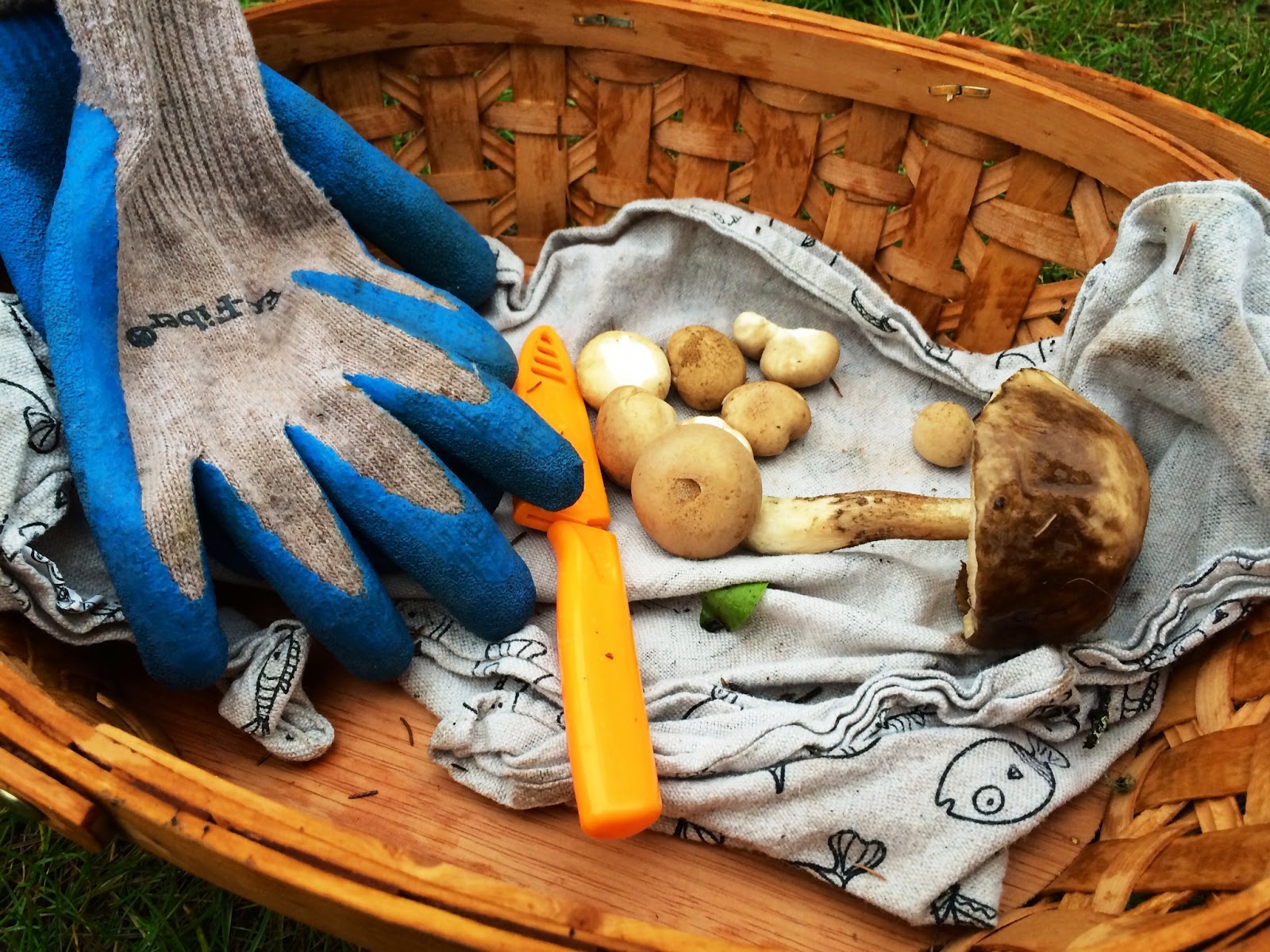 There are seemingly endless varieties of mushrooms in Alaska, and even if I can't eat them I can't help but admire their beauty and individuality.
﻿﻿﻿
﻿﻿﻿
If  you are brave enough to venture out on your own, I URGE you to exercise caution and check out the links I've included in this post, as well as doing your own research.  I do not claim to be an expert- far from it.  I'm an amateur forager eager to share my experience with others!  Foraging for mushrooms on your own is doable, as long as you arm yourself with as much knowledge as possible.  The window for mushrooms is coming to a close, but I plan on venturing out this week to see if I can spot any gems.  In the meantime, I've searched the internet and found some delicious recipes that I hope to try with my bounty.  Fingers crossed!
Happy foraging!
xo H
Posted by Heidi at 1:52 PM

You can actually eat the mushroom, sarcodon imbricatus, which is in the pic on the lower left of the pic where you say do not eat these. It's known to be bitter, but if you boil it and throw out the water a few times it'll be good to eat. I usually salt the water a bit too.